At design stage of the three storey Luxury Home, our client’s brief to the Architect and JAV Developments as the Builder is not to include a swimming pool as they prefer more rear garden space.

After the construction has reached Lock Up stage, our client set us a challenge to build a violin shaped swimming pool similar to one in New York.

From a Builder’s standpoint, there are a few challenges to overcome:

The pool is located 6m below the ground floor of the main building (lot 5). There is a narrow gap between the main building (Lot 5) and another building (Lot 4) which is still under construction and near completion. Fortunately, at that time, the dividing/retaining boundary wall between house of lot 4 and lot 5 wasn’t built which allows us to use machinery to dig the hole for the pool. With the steep gradient and soft sandy surface, Bobcat with posi track had to be used to cart the sand out of the hole into the truck waiting on the main street.

Once the pool shell was constructed, the boundary walls, the concrete paving and the external steps had to be built. Consequently, the finishing materials for plastering, tiling of the pool and pool equipment had to be manhandled.

b. Relocation of Existing Services

As the pool was not part of the initial design, most of the underground services have already been installed. Soakwells, drainage and electrical services had to be relocated outside the pool shell. Careful detailed excavation and around concrete footings had to be done.

c. Construction of The Pool shell 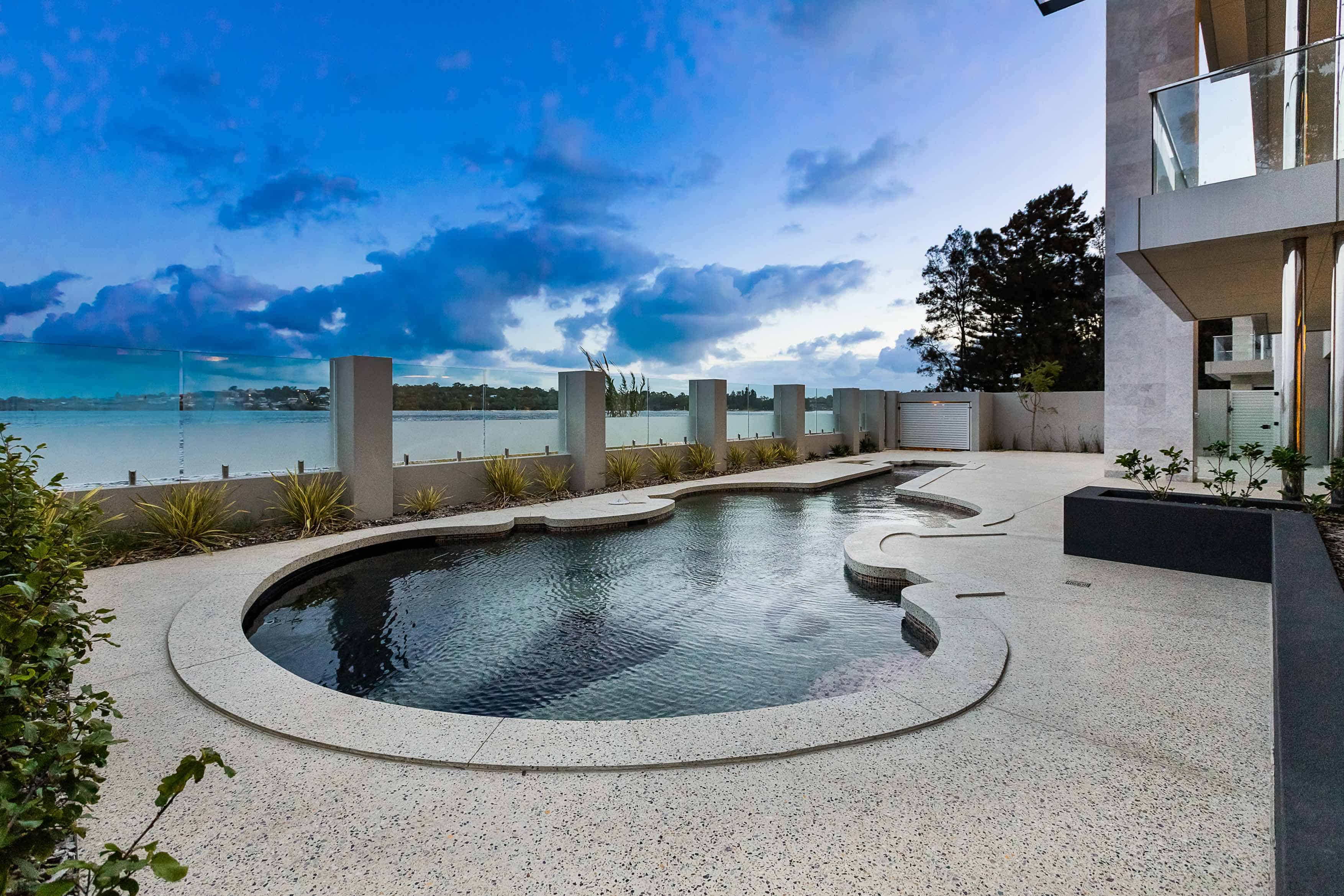 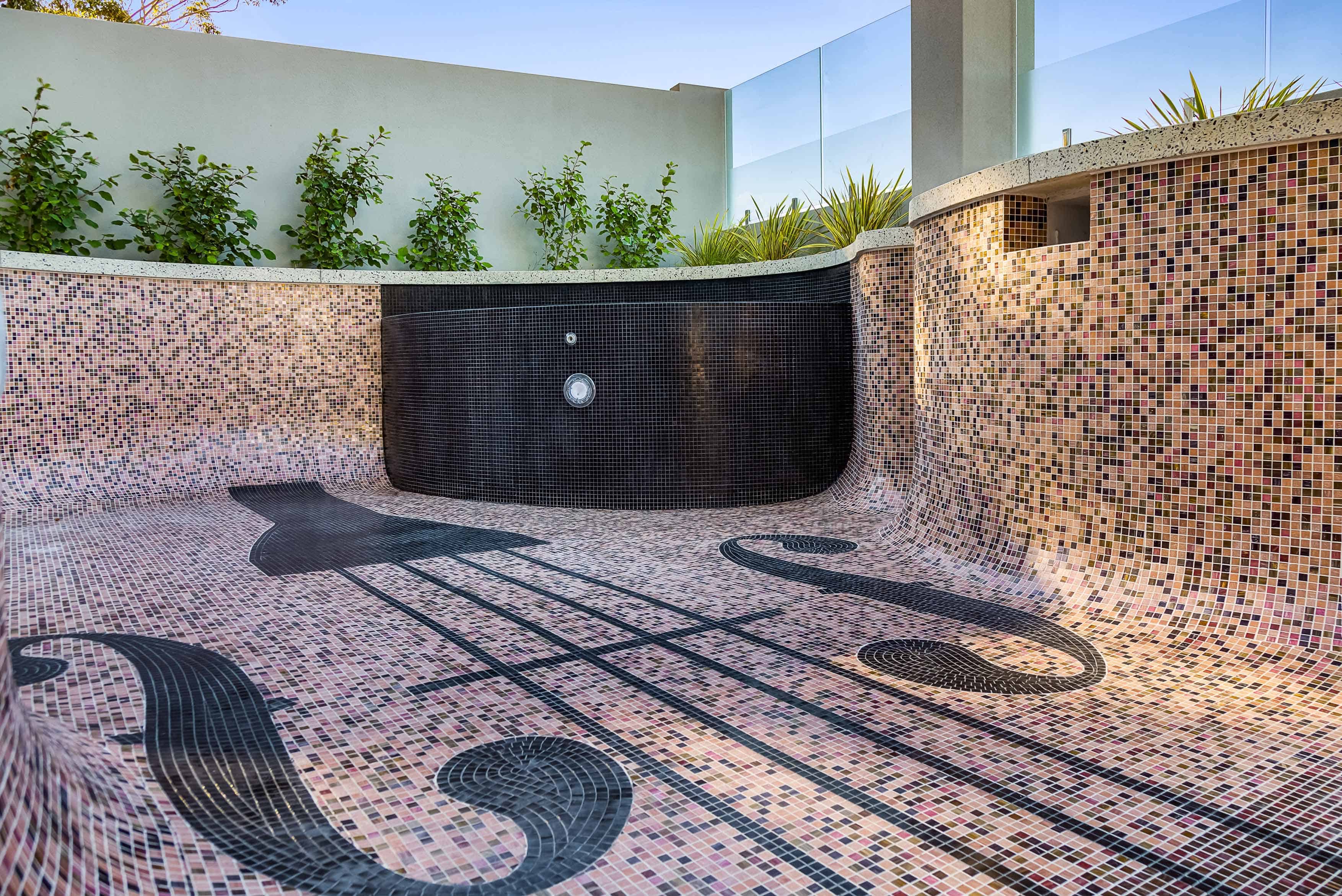 The owner wanted the pool to resemble a violin, so the scale of the pool had to be done correctly to fit the size of the block. It is smaller than the ones in New York, but we had to make sure that the width of the lap pool is not too narrow and can still be used for doing laps.

The Spa is located at the pegbox which is at the narrow top ends rather than at the bottom of the belly because we don’t want to reduce the usability of the pool.

The new glass mosaic tiles had to be specially made and shipped from overseas. It took several months for the tiles to arrive. In the meantime, we had to remove the existing waterline tile, the tiling to the floor which included the strings, the ‘f’ holes and fully screeded the walls and floors to receive the new tiles. The completion time for the swimming pool was delayed by several months.

The pool shell was designed and constructed for plaster finish and hence have rounded edges to the bottom of the pool rather than square. The tiling works become much harder to produce quality finish. Despite the obstacles, the quality of the tiling works was second to none thanks to our highly skilled trades people.

Full glass mosaic tile throughout including steps as well as for the strings, “f” holes, tail piece, chin rest and bridge. 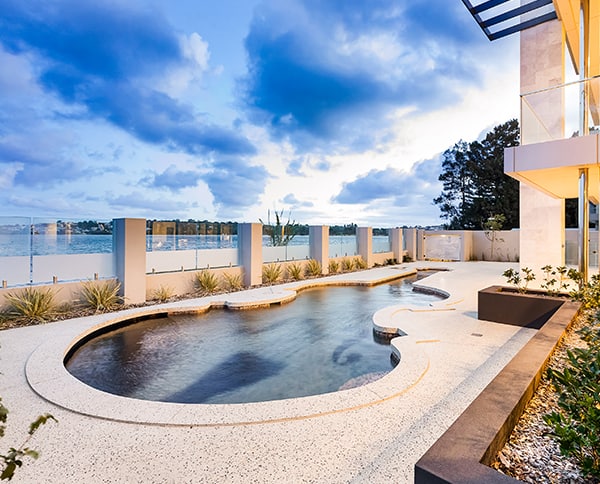 Create your dream home today! Get in touch to see how we can take this journey with you.